Summer of 2017 was marred by an engine issue which caused us quite a bit of grief. You may remember the white plume of water vapor that I mentioned was emanating from our exhaust when we sailed the boat back from Bellingham in early July.

Mike and I were forced to perform emergency surgery to the heat exchanger mid-Georgia Strait crossing. I mistakenly thought that had fixed the issue. Following our triumphant return to Vancouver, we had scheduled a few weeknight evening sails with friends. The first few times we would motor out of False Creek only to have the engine blow the radiator cap with steam billowing out of the engine room. I tried every trick in the book, replaced the coolant, bled the entire system, replaced the thermostat. Every time I fixed something, I thought for sure this time the engine was fixed. On one fateful weekend, we had invited Saxony’s father, brother and sister out for a weekend to Gambier Island. We literally left the dock and 150’ from the marina the engine blew the radiator cap. We dropped anchor within shouting range of the dock we had just left and had to use the dinghy to limp back in.

I eventually enlisted the help of Bruce, the resident engine mechanic (and god) at Spruce Harbour Marina. He spent about 45 minutes going through all of his diagnostics before grimly announcing he had bad news. We either had a cracked cylinder head (very, very bad) or a blown head gasket (not so bad but still an expensive proposition to fix).

The head gasket sits between the main body of the engine where the cylinders and pistons sit and the head which contains the valves and such. Around all of the pistons are intricate channels where the coolant is circulated to remove the heat from the engine. When a head gasket fails, the seal between the cylinder and the coolant channels is compromised. We believe that the repeated overheating issues we had with the clogged heat exchanger led to 2 or 3 steam inducing events in the coolant circuit. The steam reached such high pressures that it punctured the gasket. Now every time we started the engine a portion of the compression of the cylinders was finding it’s way into the coolant circuit leading to bubbling in the coolant system and overheating.

I called the local boat mechanical shop, Stem to Stern, and they advised they would gladly do the work. However, as it was busy summer season they wouldn’t be able to get to my project until mid-September! That was 7 weeks away and would ensure the rest of our boating season would be shot. Oh, and the cost would be approximately $2,200 to fix. Yikes!

By this point our neighbors on the dock knew of our predicament. That is when Cecil planted the seed in my mind that we could fix this ourselves. He said it wasn’t complicated at all and he had a torque wrench he could lend us. I did some digging online and found some very instructional YouTube videos that gave me the confidence that yes, we could most likely do this!

Our engine is a Universal 5432 which in reality is a marinized Kubota v1501 tractor engine. And there are tons and tons of tractor engines around and parts are dirt cheap. I ordered the parts catalog and called around tractor mechanic shops in Surrey. I was able to find a new head gasket for $90.00! I also purchased a new Head Cover Gasket for $40. I was also able to find information on the required head bolt torque. I picked up all of the parts and Saxony and I got to work. We filmed the major parts of our disassembly to make sure we knew how to put everything back together. And I can now report that it is true, these old diesel engines are very simple and built like tanks.

In the end, it took us a total of approximately 14 hours and $400 in miscellaneous parts and supplies and we successfully changed our head gasket! We took the opportunity to perform an oil change. The whole exercise was extremely worthwhile as not only did we demystify what we thought was a complex project but we also gained an incredible understanding of our engine and now know this thing can keep going for a very long time. It’s rock solid. 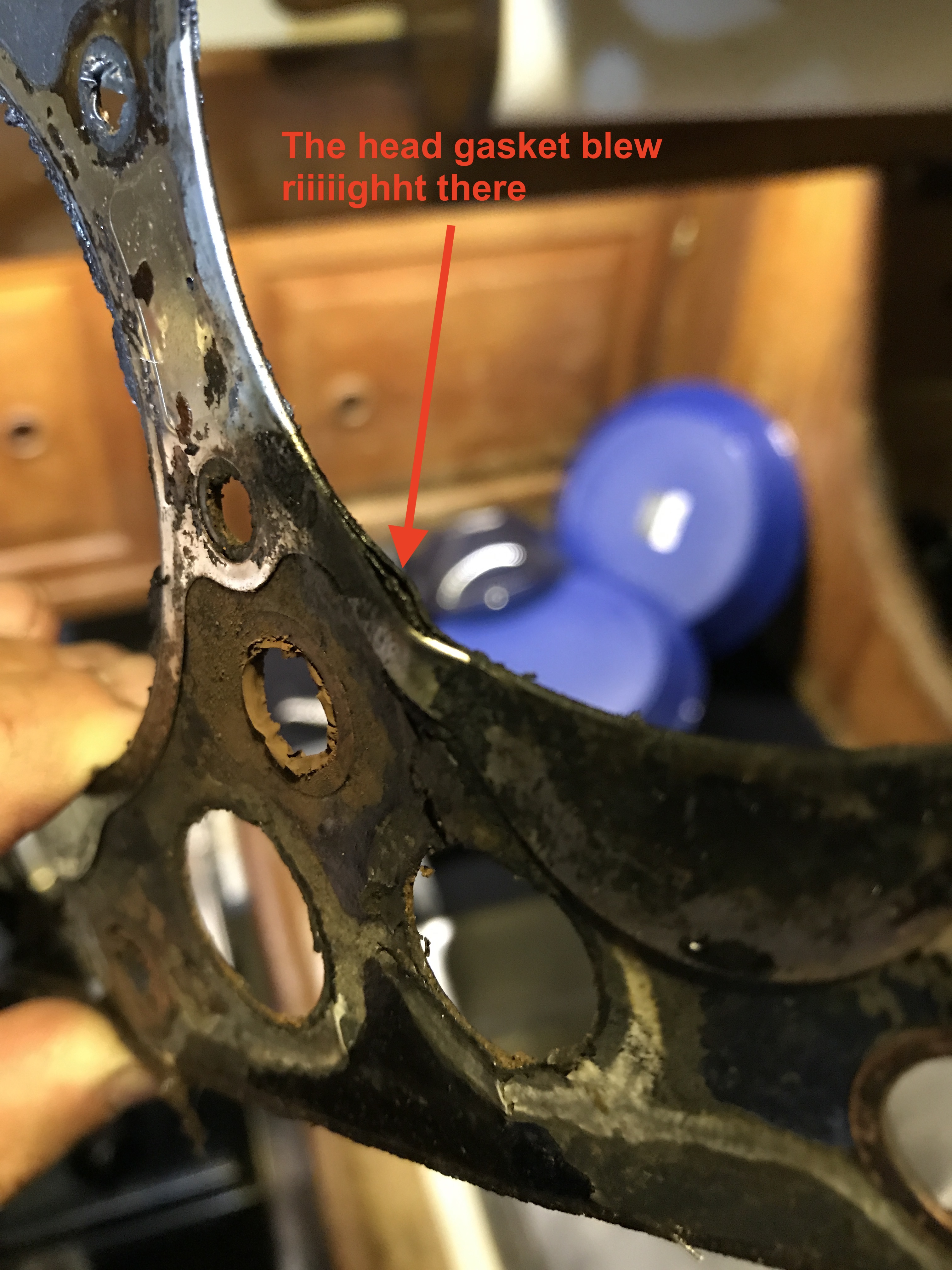 We re-assembled the engine and what a pleasure it was to see it purr like a kitten, ok, big cat!