The spring of 2017 saw us perform some significant upgrades to Leela’s forepeak area. Like, MASSIVE amount of work. The kind of work where half way through you feel like crying, wondering why in the world you got yourself in this kind of a mess with no way out but to keep moving forward and seeing the dolla’billz fly out the window. If you’re curious, completing all of the projects below cost us about $15,000 CAD. Yikes.

The projects were meant to solve four major problems:

Smells In the Head:

I had read in the boat refit bible This Old Boat that the absolute best holding tank arrangement is a gravity system “if you can make it work on your boat”. Well, we made it work. We blasted the head and lavatory and counter space completely out of the boat. We plugged the previous thru-hull holes, removed the large holding tank and all associated hoses. It was liberating to get all of this poo smelling junk out of Leela.

Once everything was blasted out of the head area, I purchased a 9 usgal polypropylene tank and we mounted it above and behind the head. This was only possible with the cabinetry removed. We then hired an extremely talented Shipwright who rebuilt the cabinetry exactly as it was before. I plumbed the discharge of the holding tank directly to a brand new 2” bronze seacock. We chose Schedule 40 PVC as it will never allow odours to permeate through the pipe and it is bombproof. The only flexible (and thus potentially smelly) piece of pipe is now the short section from the discharge of the head to the top of the tank.

The new gravity discharge arrangement is thus absolutely brilliant. When not discharging to sea, the 2” seacock valve is closed and fluids accumulate in the tank. When we are sufficiently far away from the coast line, we simply open the valve and the contents of the tank are satisfyingly drained by gravity, every single time, without fail. Complete with audible gurgle! The beauty of the system is on a starboard tack when Leela is heeling to port we can open the valve and the motion of the boat through the waves pushes water in and out of the tank for a good clean.

We absolutely love this system and plan on installing a gravity discharge tank on all of our future boats. No more diverting valves, smelly flexible hoses, macerator pumps, etc.. Gravity works all of the time!

We repainted the head area, installed a new countertop and brand new stainless steel lavatory. In the end, there was no real visual change to the head but every single component was replaced and improved.

Leaks in the V-Berth:

We could tell the thin plywood headliner and sidewall planks were water logged so the project began with us completely stripping the v-berth area down to bare fiberglass. Only by exposing everything could we finally determine the origin of the pesky leaks. 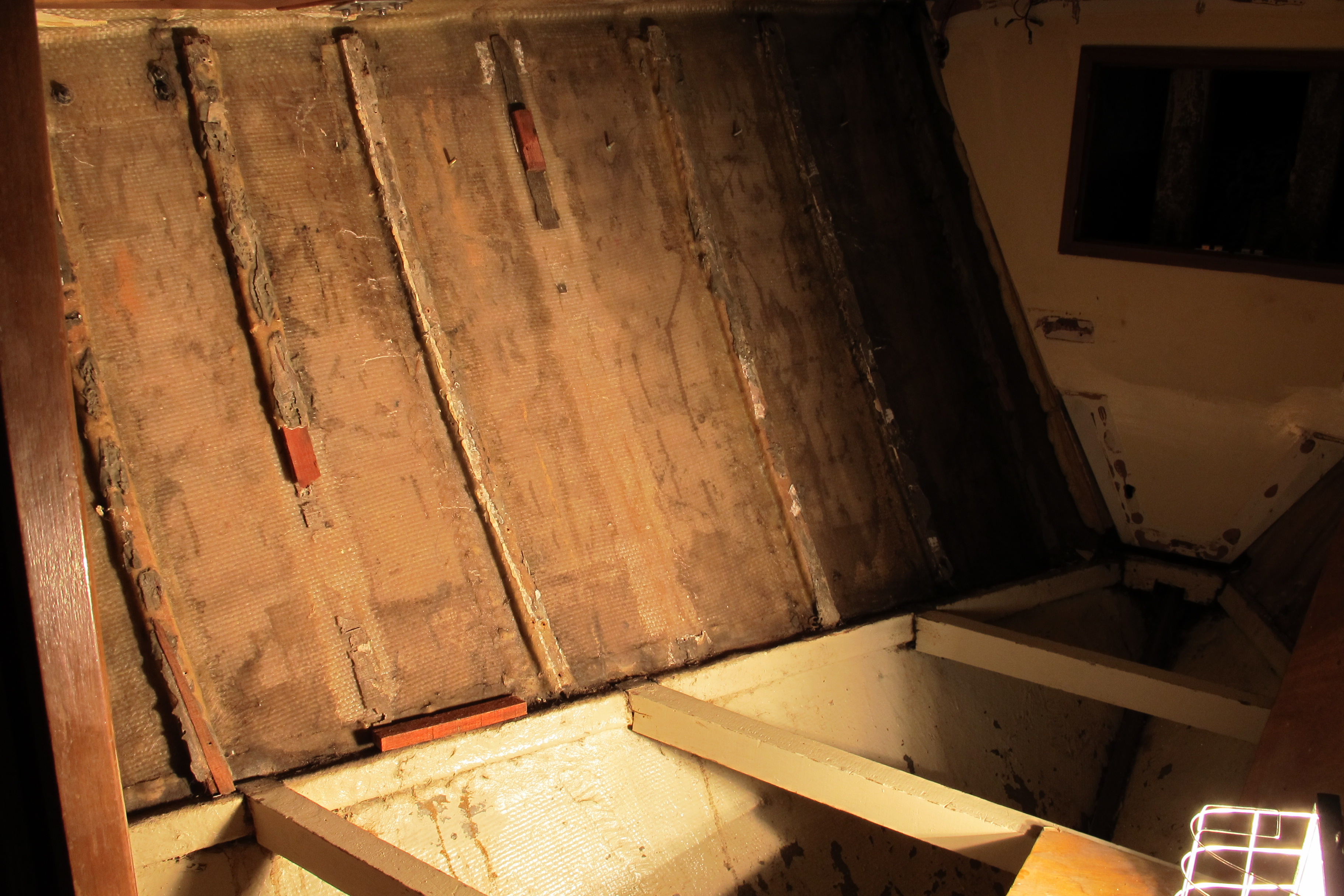 Back on deck, we had decided to remove the bowsprit to re-bed all thru-deck penetrations. This project led to what could have been a true catastrophe.

The bowsprit was thru-bolted on the deck and those were relatively easy to remove. However, unbeknownst to us, the entire bowsprit was polysulphided onto the deck as well. In other words, almost impossible to remove. After much grunting and cursing, we found a solution that worked. We tied the bow end of the bowsprit to the staysail halyard and used the winch to slowly but surely lift the front of the bowsprit up ¼” at a time. As the lifting slowly happened, Saxony used a long thin blade to get under the bowsprit and cut the polysulphide.

So far so good and we were feeling mighty proud of ourselves. I’m at the winch station applying gentle pressure and Saxony is on her knees working the blade. All of a sudden, in a flash, CRACK the bowsprit completely let go from the deck and actually fell off the front end of the boat. In other words, the bowsprit went overboard!! Keep in mind we are in a yard, on the hard, with the deck of the boat about 10-12’ above a very hard concrete floor. And this bowsprit is about 10’ long total and must weigh about 250 lbs. Luckily the bowsprit was tied to the staysail halyard so it pendulum-ed alongside the port side of Leela narrowly missing a very cute little wooden sailboat also on the hard next to us and came to a stop dangling from our staysail halyard with, I kid you not, the pulpit 10” above the concrete floor. The whole thing happened in 1.5 seconds. When the noise and commotion ended Saxony and I just couldn’t believe our luck. We could have dropped the bowsprit all the way to the ground which would have bent the stainless steel pulpit beyond fixing and likely broken the bowsprit. We could have rammed the boat next to us. But no! We got away with minor scratches on the bulwark cap rail and that was it!!

We potted all of the holes thru the deck to ensure no more core would be exposed to the bowsprit thru-bolts. The varnish on the bowsprit was getting old and flaky so we stripped the bowsprit down to bare wood. This allowed us to verify that the wood was in pristine condition with no rot. We layered two coats of varnish and then painted the whole bowsprit white. That way a future owner could strip down to varnish fairly easily if so desired. But we did keep the very tip varnished because, well, isn’t that nautical.

The pulpit had a few cracked welds so we had those fixed at the shop of our friend Andy Phillips of Black Fin Design.

The Shipwright rebuilt the entire v-berth with new sidewalls and shelving on both sides. We decided to leave the ceiling uncovered for now and painted the new wood and exposed fiberglass ceiling white.

The hawse pipes are holes through the bulwark through which we pass mooring lines and such. The interior core of the bulwark is connected to the core of the deck. We found that when we ran a hose on the bulwarks we could notice leaks inside the boat. We removed the bronze hawse pipes to expose the opening through the bulwark and were floored at the lack of craftsmanship from the original builders. It appears they took a hack saw to make the hole and barely bothered to properly seal the insides of the hole with fiberglass.

We thoroughly cleaned the insides of each hawsepipe and reglassed the openings. We over drilled the bolt holes and filled with epoxy to prevent exposing the bulwark core to water intrusion. Finally, we reinstalled the bulwarks with new bronze bolts. Leaks solved!

These projects took us the better part of an entire winter and spring working most weekends. Leela wasn’t launched until early June due to inevitable delays in the project. In the end, there weren’t many visible improvements to Leela, but we knew in our hearts that we had considerably improved the plumbing systems and leak-proofness of our boat. Time to go sailing!