After an epic winter and spring of boat projects, it was time to put Leela back in the water and sail her back to Vancouver. Saxony was away that weekend so I enlisted the help of my business partner Mike and Byron, a Leavetown colleague.

The plan was set. Drive down to Bellingham in the early afternoon , splash Leela and beeline over to Inati Bay to spend a relaxing evening getting re-acquainted with Leela. Of course, mother nature had other plans for us. The wind was too strong to run the crane so we were grounded. We ended up having some Mexican Food and an early night aboard Leela, on the hard in the boatyard!

The following morning was sunny, beautiful and calm. We wasted no time splashing, ensuring there were no leaks through the new thru-hulls I had installed and motoring out of Bellingham harbor.

There was absolutely no wind as we made our way out of Bellingham Bay, up Hale Passage, South of Sucia Passage and onwards South of Saturna Island and into Bedwell Harbour to replenish our diesel. With no sails to tend to, we took turns pulling ourselves in the dinghy, making yummy food and generally relaxing.

We had planned a rendez-vous with the Good Captain John Nichols, his girlfriend Katerine, and his new to him C&C 30 named s/v Lalage. You may remember Captain John, he has been a regular in our stories. John was one of the original partner in the Black Knight, the infamous Catalina 27 that started all of this. 🙂 We radio’ed with the Good Captain and met him just outside of Bedwell Harbour. We still had 11 miles to go North to Montague Harbour and lo’ and behold a beautiful Southerly wind filled in and allowed us both to sail together. The first meeting between Lalage and Leela and they both got to strut their sails and show off. I was mighty pleased with our crew and Leela in that Lalage was never able to get the upper hand and gain on us in these relatively light winds. And this was no small feat as Leela weighs 12,000 lbs more and the Good Captain used to race for team Canada! Go Leela! 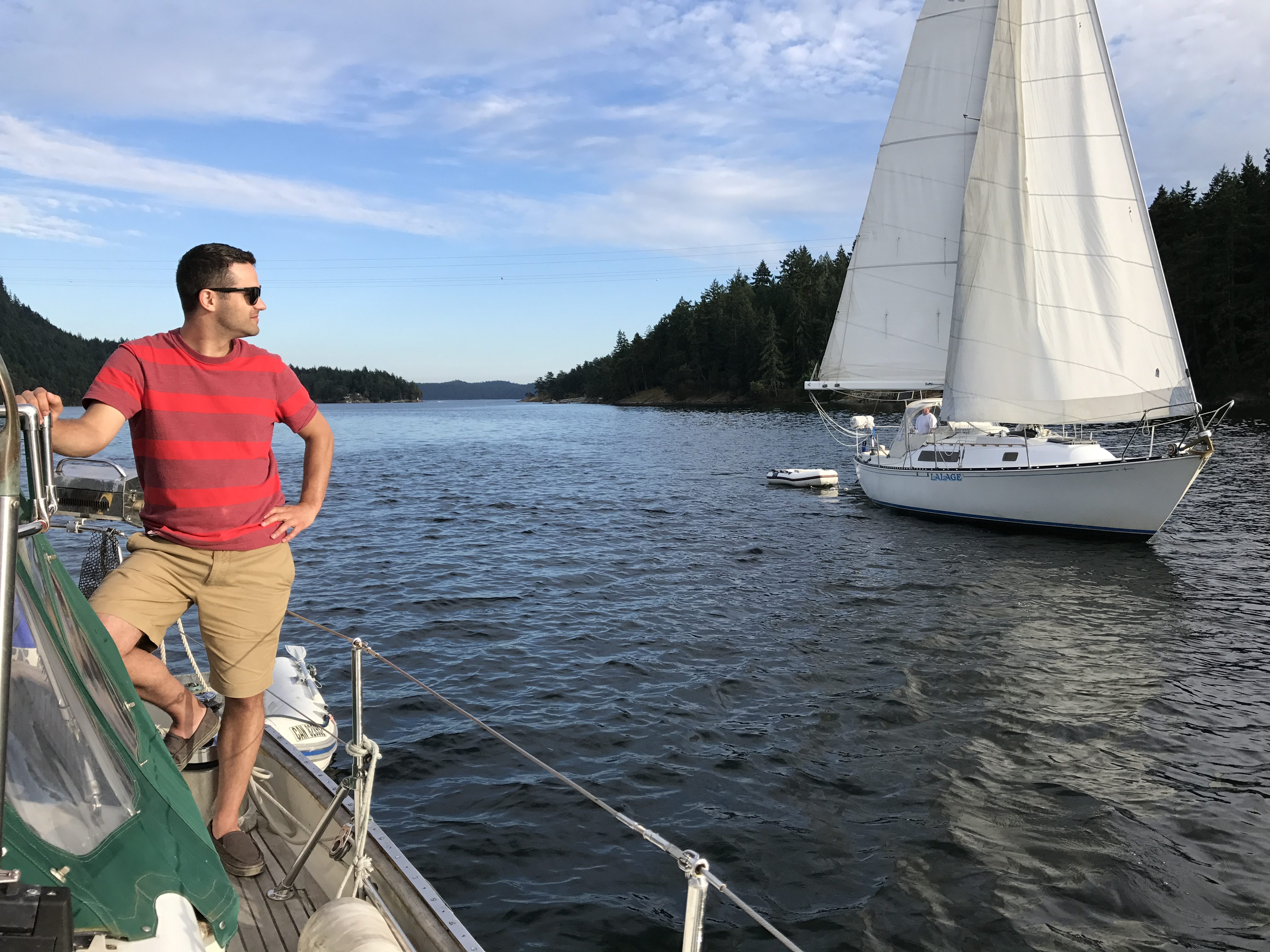 We had a lovely evening at anchor in Montague Harbour dreaming of all the sails we would one day do together. The Good Captain now lives on Vancouver Island so we don’t get see him as often. The next morning we were off early and the wind was, once again, very light. We motored to Porlier Passage which we had timed impeccably.

As soon as we entered Georgia Strait for the 22nm crossing to Vancouver, the engine kept on blowing the radiator cap. You may remember earlier in this post where I point out the white plume at the bottom of a picture. During our entire journey, when the engine was running, there was a significant amount of white smoke coming out of the engine. I could tell it was water vapour and my Diesel Mechanic book was telling me this was likely due to overheating. So here we are a few miles offshore in Georgia Strait and the engine blows the radiator gasket. Two times in a row. We need the engine to navigate False Creek. Crap, we need to fix this now.

We put up the Gennaker in the light breeze. This allowed us to make good towards Vancouver at 2 knots. Byron skillfully steered Leela milking the wind as best as possible. I crawled in the engine room and removed the heat exchanger that separates the raw sea water loop from the engine coolant loop. Sure enough, the heat exchanger was pretty much completely plugged by some type of mineral deposit. While under sail in Georgia Strait, Mike and took a drill and carefully drilled out the heat exchanger tubes, re-installed the heat exchanger and refilled the engine with coolant. Bingo! Mission accomplished.

And so it was, a short 2 day weekend to sail Leela back from Bellingham to Vancouver. We sailed into False Creek and moored at the Spruce Harbour Marina where Saxony and I spent the summer living aboard.