If there was an award for biggest delay between the events taking place and this blog post being written, I would win the crown prize! Now, let’s try to go back to Summer 2015… Late August to be precise.

Summer 2015 in the Pacific Northwest was one of the driest in recorded history. Fair to say we got very lucky with our summer cruising plans. I’m a bit of a weather fanatic, ie my mood swings with the weather. My dad on the other hand, he is a legendary weather nerd. When vacationing in Mexico, this guy checks out satellite imagery of clouds and their wind drift to choose which beach to go to for the day!

All summer long I had been telling him all about our insane 60-day streak of sunshine, the wealth of marine life Saxony and I had seen and the general good times we were having drinking gin martinis at anchor in the evenings. I guess my dear sister Tamara also wanted in on the fun so they eventually decided to join us on Leela for 5 days of mellow Desolation Sound cruising. For them, this meant flying from Montreal to Vancouver and then boarding a 1hr floatplane ride to meet us in Refuge Cove.

I was incredibly excited to welcome them into our world for a few days. And of course, as with all things boat related, I was elbow deep in poo and head repairs when they arrived. I even had my dad stop by a chandlery in Vancouver to pick up some parts for the head. The joys!

We had pre-stocked Leela with loads of food, beer, wine and ice so when dad and Tamara arrived we didn’t waste any time and motored out of Refuge Cove and headed to Squirrel Cove for the night. Tamara had never been on a sailboat of this size so it was all very exciting. As for my dad, Roger’s his name, by the way, he was very happy to be back on a sailboat. I say “back” because he too used to own a beautiful sailboat. In fact, he is the man behind my sailing addiction.

Way back in the summer of 1990, when my dad was approximately the same age I am now, he bartered a solarium (this is my dad’s business) for a 32 ft. sailboat on Lake Champlain. He didn’t really know how to sail it and neither did my step-mom Nadya or anyone else for that matter. And to make matters worse, Nadya and I were terrified anytime the boat heeled more than 10 degrees. Terrified as in I was crying on the railing the whole time. My poor dad had to make do with a panicked crew which was no help to him and after a summer of this type of “fun”, he sold the boat. But I digress, here we are 24 years later and the tables have turned! I no longer cry on the railing and plan on showing my dad and sister a good time!

In the end, we ended up cruising around West Redonda Island over the course of the next 5 days. On the second day, we stopped at Cassel Lake and managed to score the coveted spot below the waterfall. Tamara absolutely LOVED this place and still says this was one of the most magical places she’s ever visited.

Following our time at Cassel Lake, we transited to Pendrell Sound. I wish I could say we sailed but the wind was sorely missing on this day. Instead, we baked in the sun and interrupted our day swimming off the boat and unsuccessful attempts at fishing. That night we anchored in a tiny little hole between reefs. Trying to be nice and thoughtful we stern tied to shore to ensure we would not swing in the little anchorage and make room for other boats who might arrive later.

This turned out to be a very bad decision and that night we had the scariest moment of our entire summer cruise. Around 2 am Saxony woke me up with a startle as Leela was heeled over like crazy and an intense squall (35+ knots) was raging outside. I gathered my wits, some clothing and my headlamp and as I walked by Tamara in her bunk she asked: “is this normal??!” I stepped into the cockpit to see that Leela was broadside to the squall and well-heeled over due to the wind. The wind force was such that our anchor had dragged yet our stern was still tied to shore. We were literally feet from the rocky shore and it was pitch black. Had the squall continued, we likely would have dragged until we lay on the rocks. Fortunately, the squall ended as quickly as it started. Following this incident Saxony and I spent over an hour retrieving the stern line and trying to re-anchor in the dark using Navionics on our iPad as the only means of figuring out where we were. It was intense. Lucky for my dad, he slept through most of it! 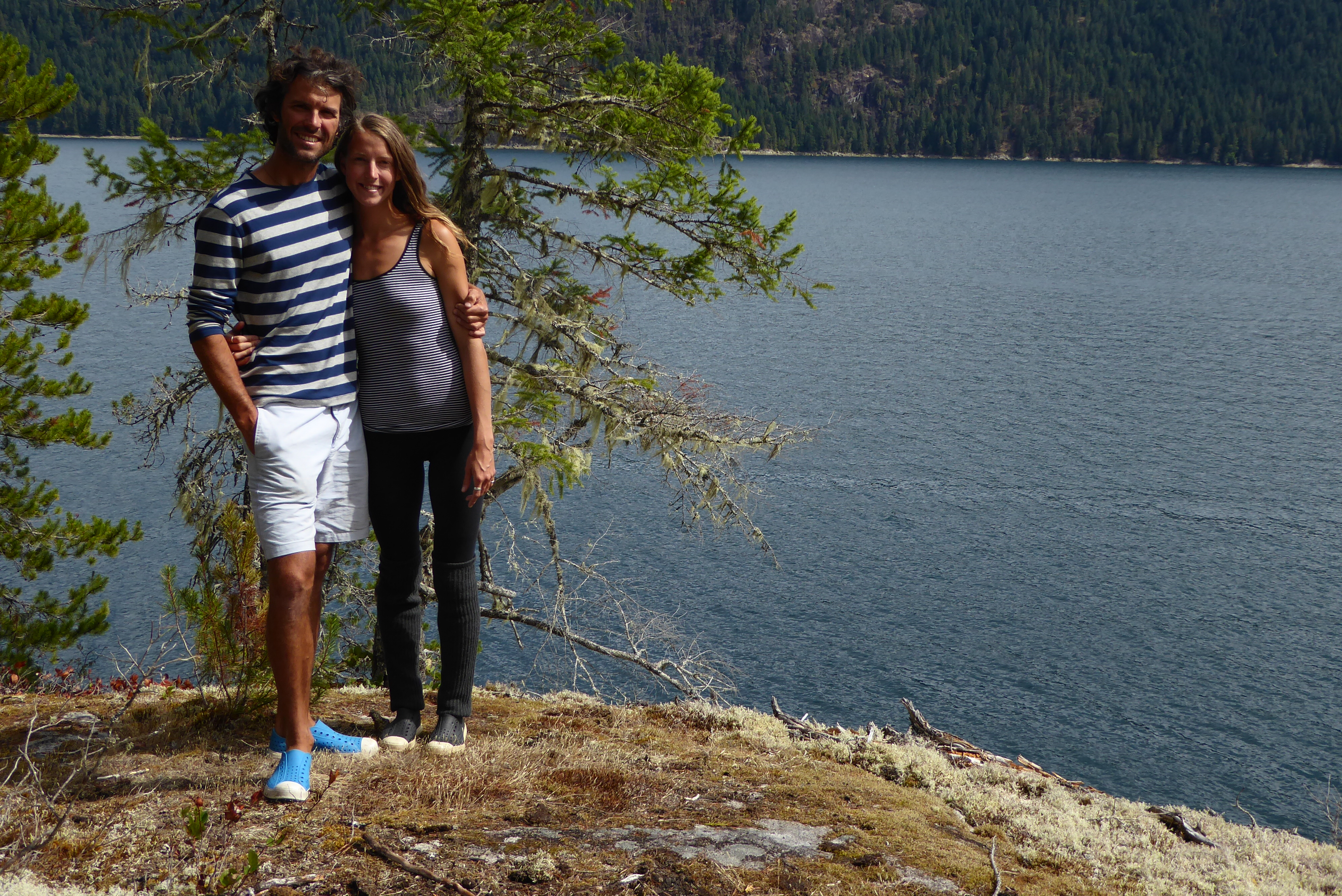 The night squall we experienced was the beginning of the unravelling of the weather. And considering it had been sunny for 2-3 months, it was quite the unravelling. Luckily for us, we did experience another so-so day which brought great sailing winds but the low pressure and storms that followed eventually caused severe weather resulting in power shortages for well over 400,000 people in Vancouver. Luckily my dad and Tamara were able to enjoy their last few days in “relative” calm and decent weather and were able to fly out just in the nick of time before all hell broke loose. Here is a video of Leela sailing out of Pendrell Sound to Roscoe Bay. 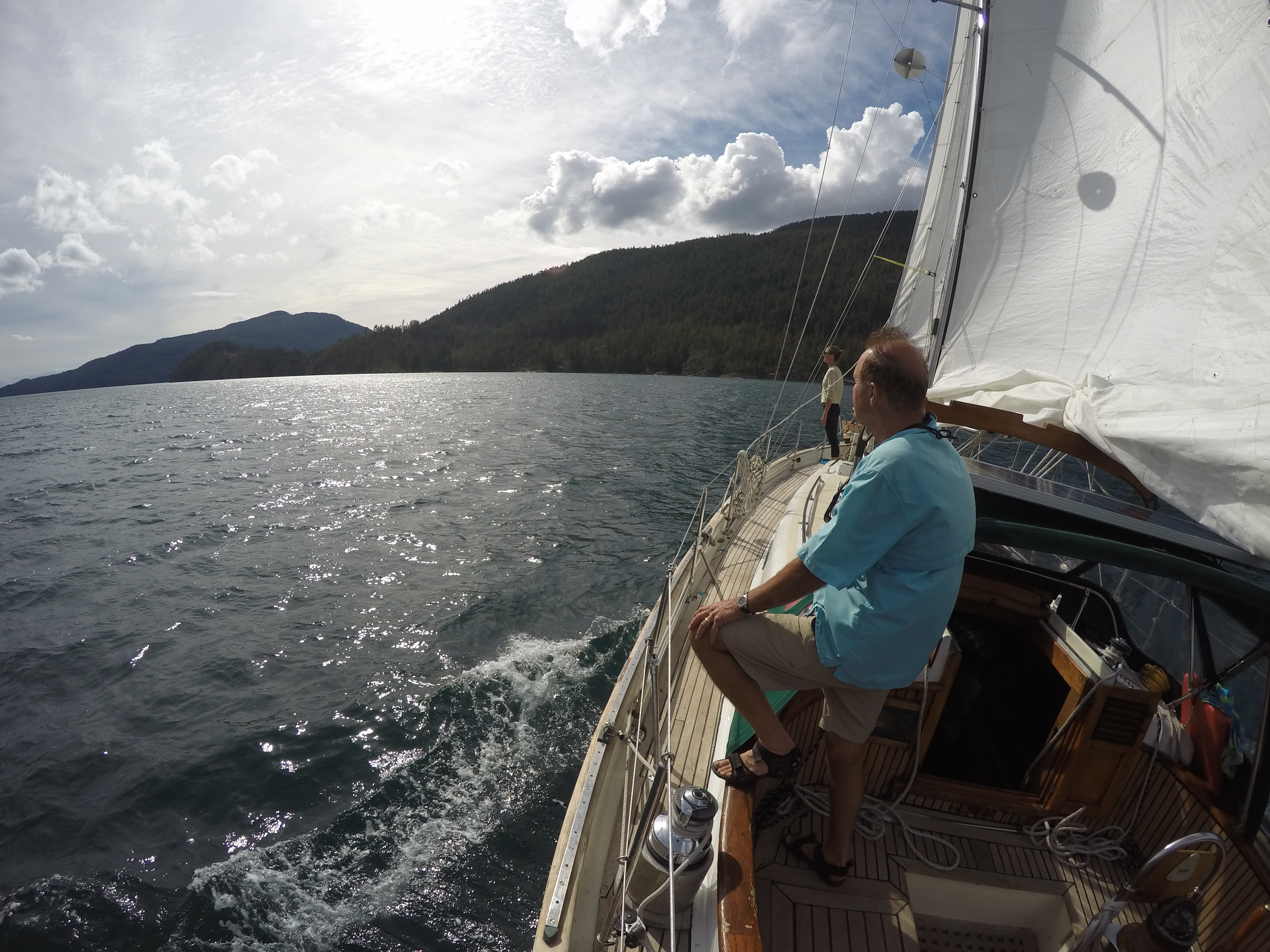 We woke up to stormy skies and decided to make the short hop across Homfray Channel to Prideaux Haven. We dropped anchor around noon and spent the rest of the day getting rocked at anchor, playing cards, sipping wine and, lo and behold, doing some collage! Yes, my dad indulged Saxony, Tamara and I and partook in a collage session with us. He’ll never admit it but I think he enjoyed it!

Next morning we had a short motor back to Refuge Cove for our farewells. Dad and Tamara took off in the nick of time before the real weather hit. Saxony and I refuelled Leela and sailed on to Gorge Harbour on Cortes Island. Beautiful moments spent with my family, I will cherish them forever. 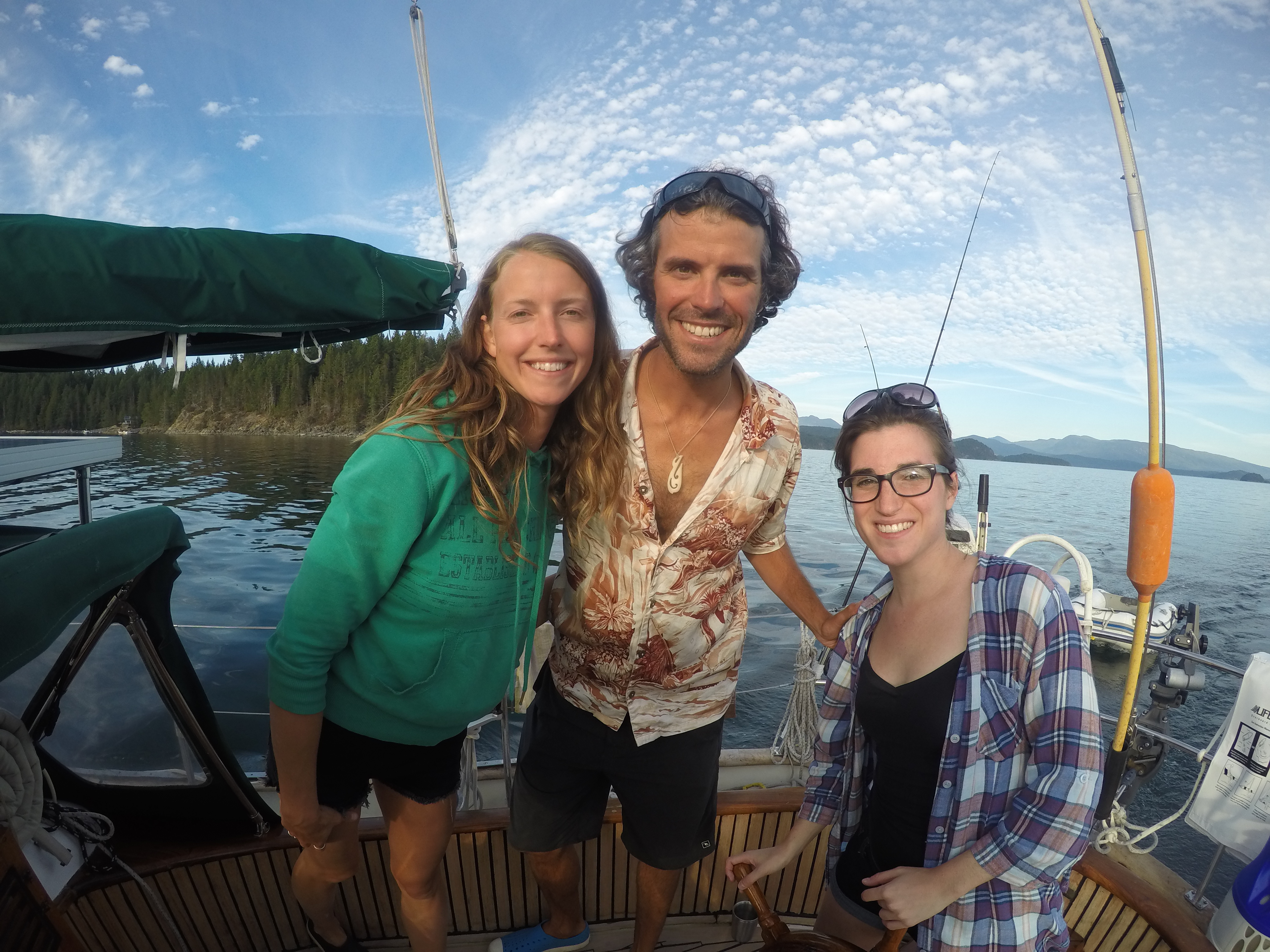 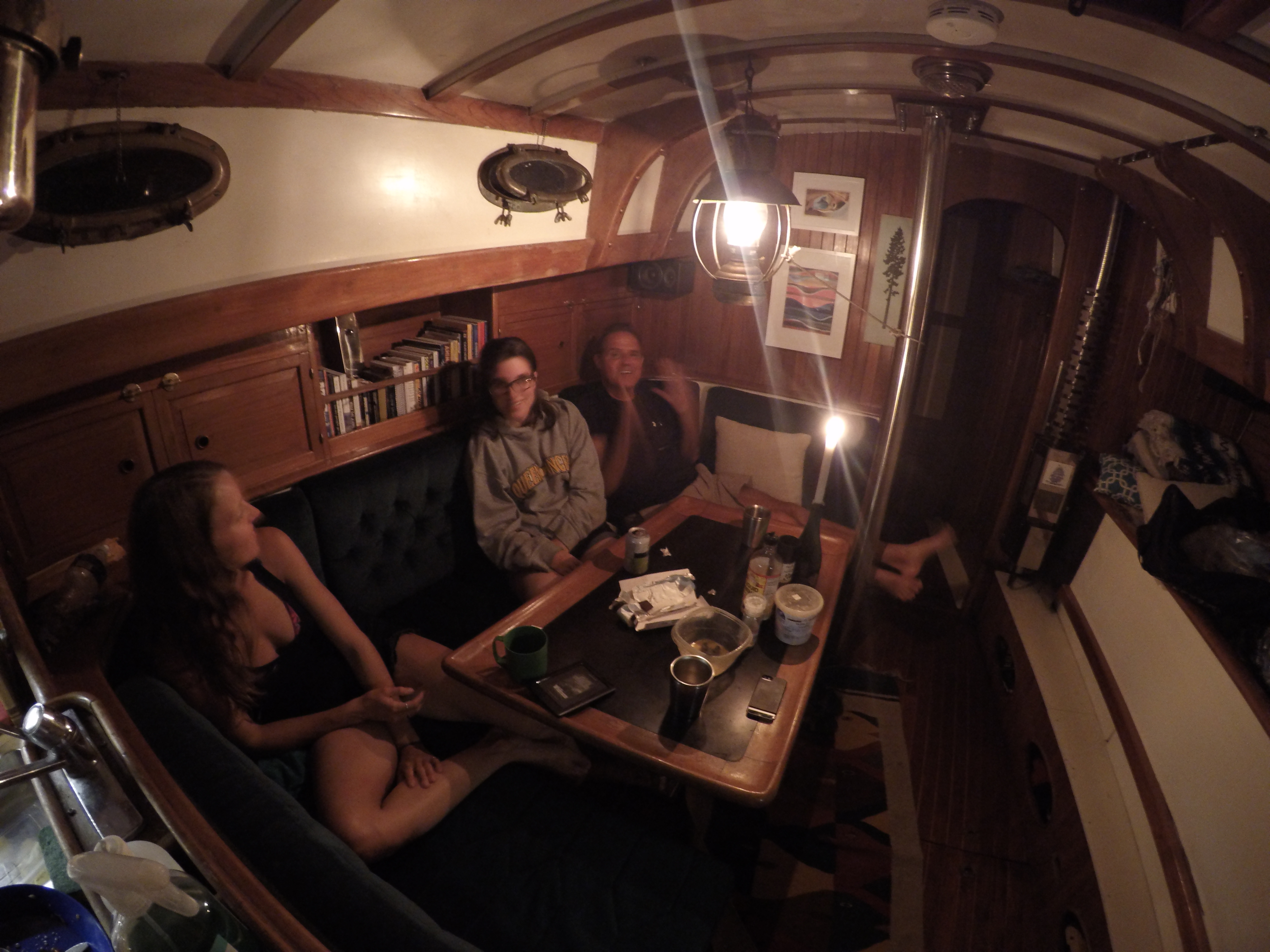 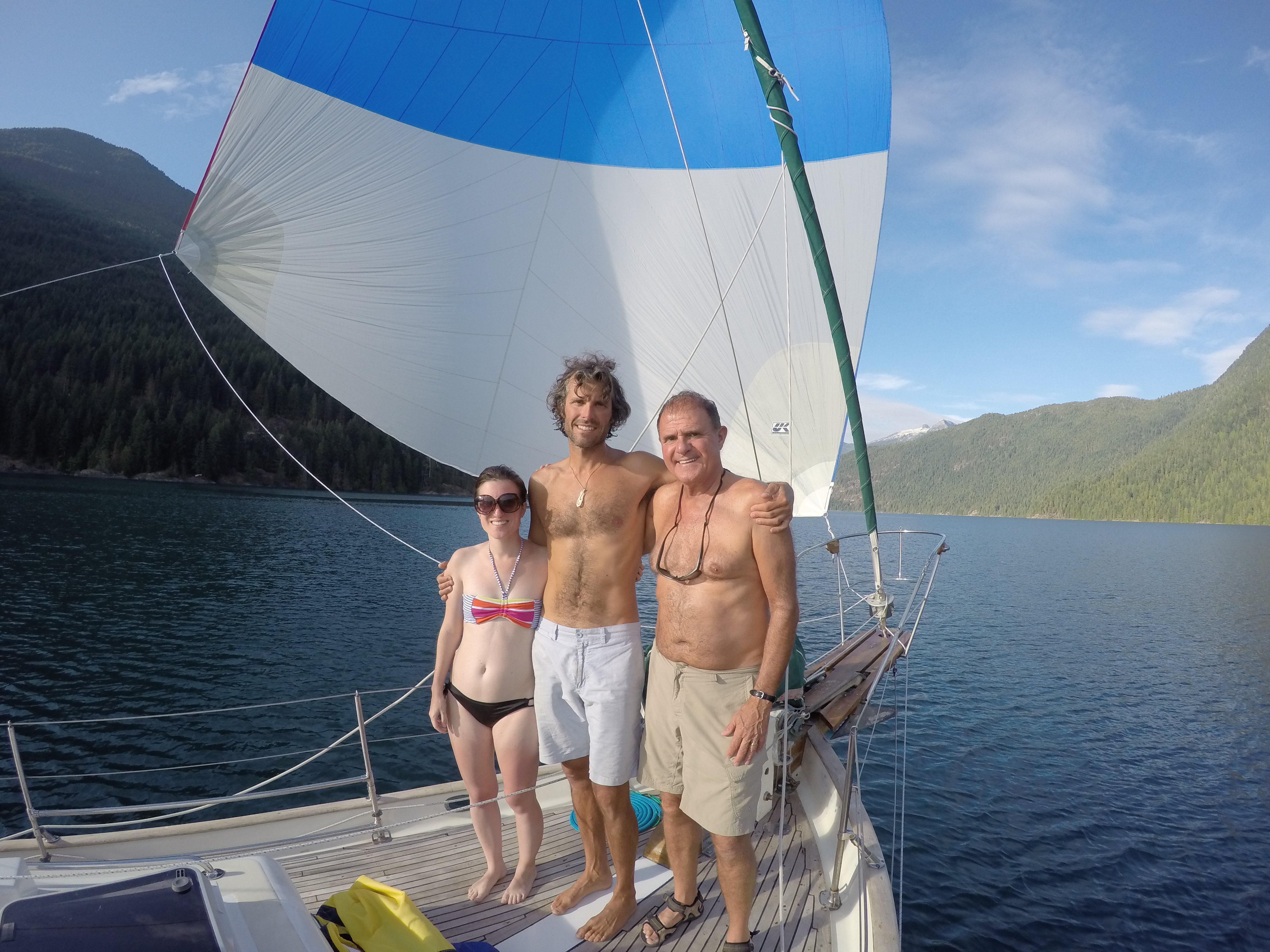 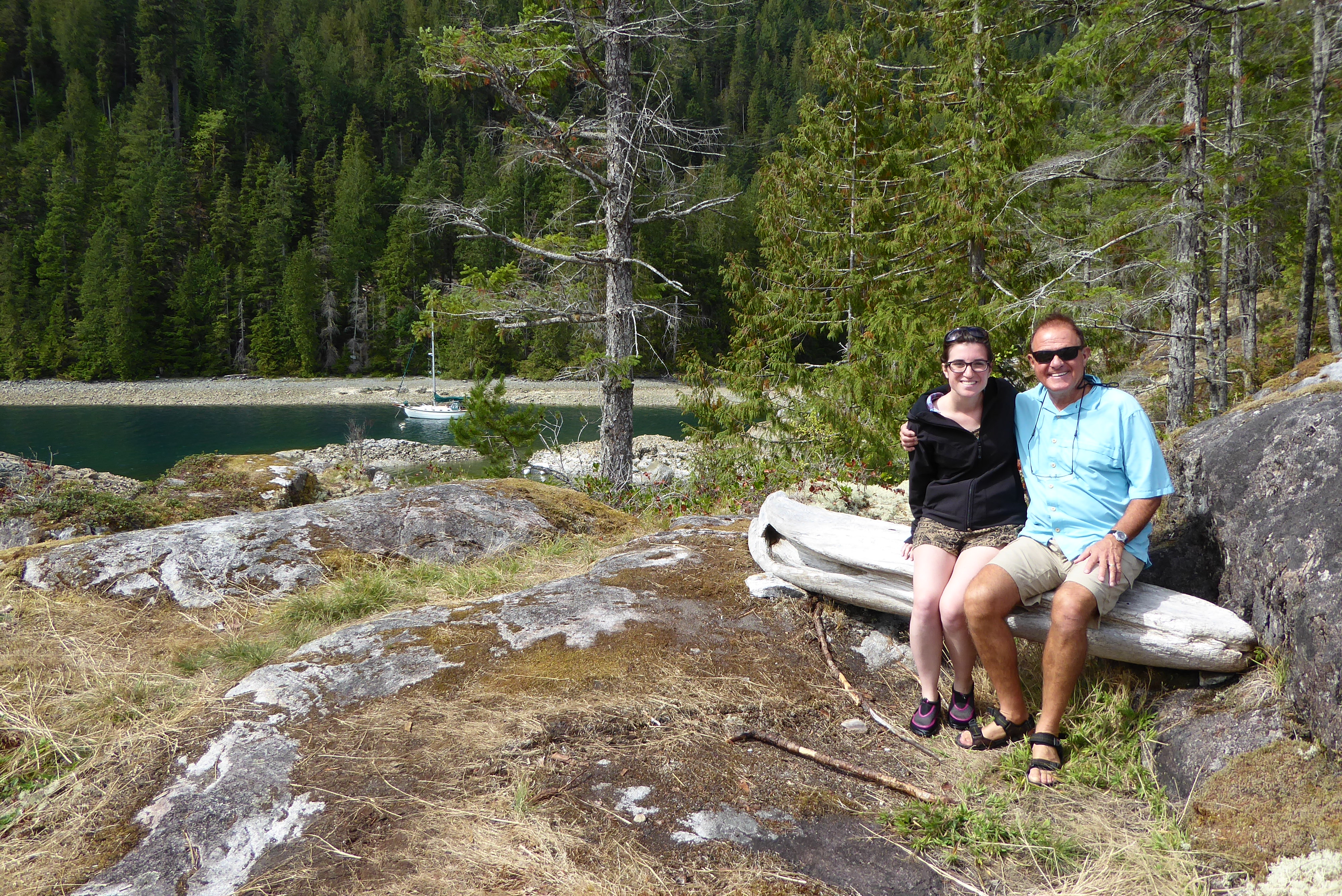 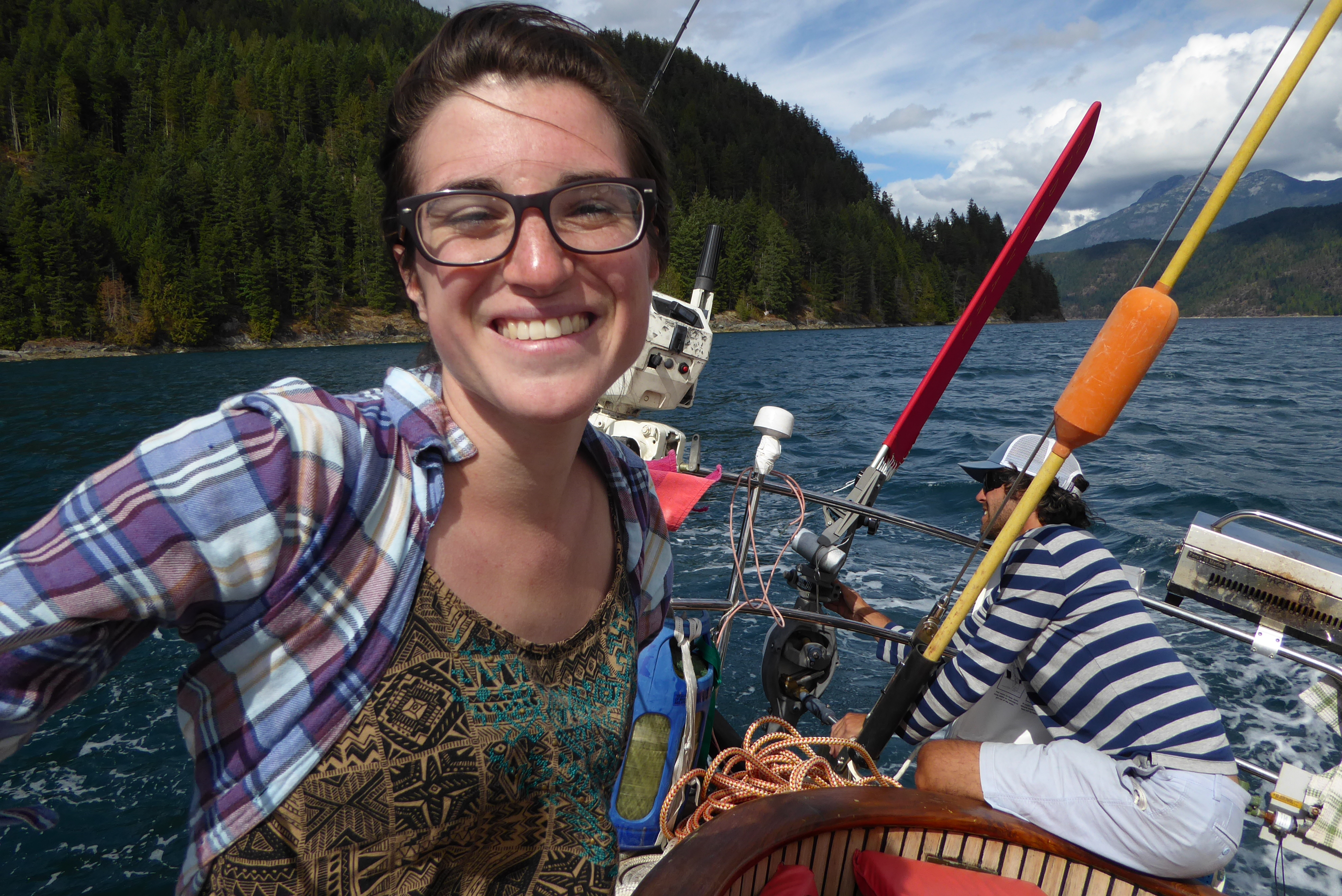