The more I work on this boat the more I scratch my head in wonder: “why oh why did they decide to build [insert pretty much any part of the boat] in such a crappy way? I am learning that this applies to most boats too, save maybe for the really, really high-end ones.

Thirty-six years ago the Taiwanese boatyard that built Leela welded a black steel diesel tank, installed it in the mostly empty hull and built the boat around the tank. They also decided to wrap the tank in fiberglass for good measure. That way if moisture got in between the steel tank and fiberglass skin it would really get all the opportunity in the world to rot away at the tank from the outside. When we purchased Leela we knew the tank was a ticking time bomb. From all the research we could do online we knew that these tanks had a limited lifespan and ours was reaching the end of “typical” life. These tanks can rot and develop pin-hole leaks in two ways.

Earlier this year we did a major boat and bilge clean. After that big push the boat smelled OK for a few weeks but sure enough, it didn’t take long for the overwhelming stench of diesel to permeate the boat again. I was at my wits end. We decided it was time to bite the bullet, yank out the tank and replace with a new one.

The first task was to sawzall the existing tank out of there. On the project-fun-o-meter scale, this particular one ranks as a 1.5/10. It’s noisy, super smelly and a sawzall can really rattle your brain. I started by drilling holes in the top sheet of steel to give the saw access and just started cutting pieces out as I could. 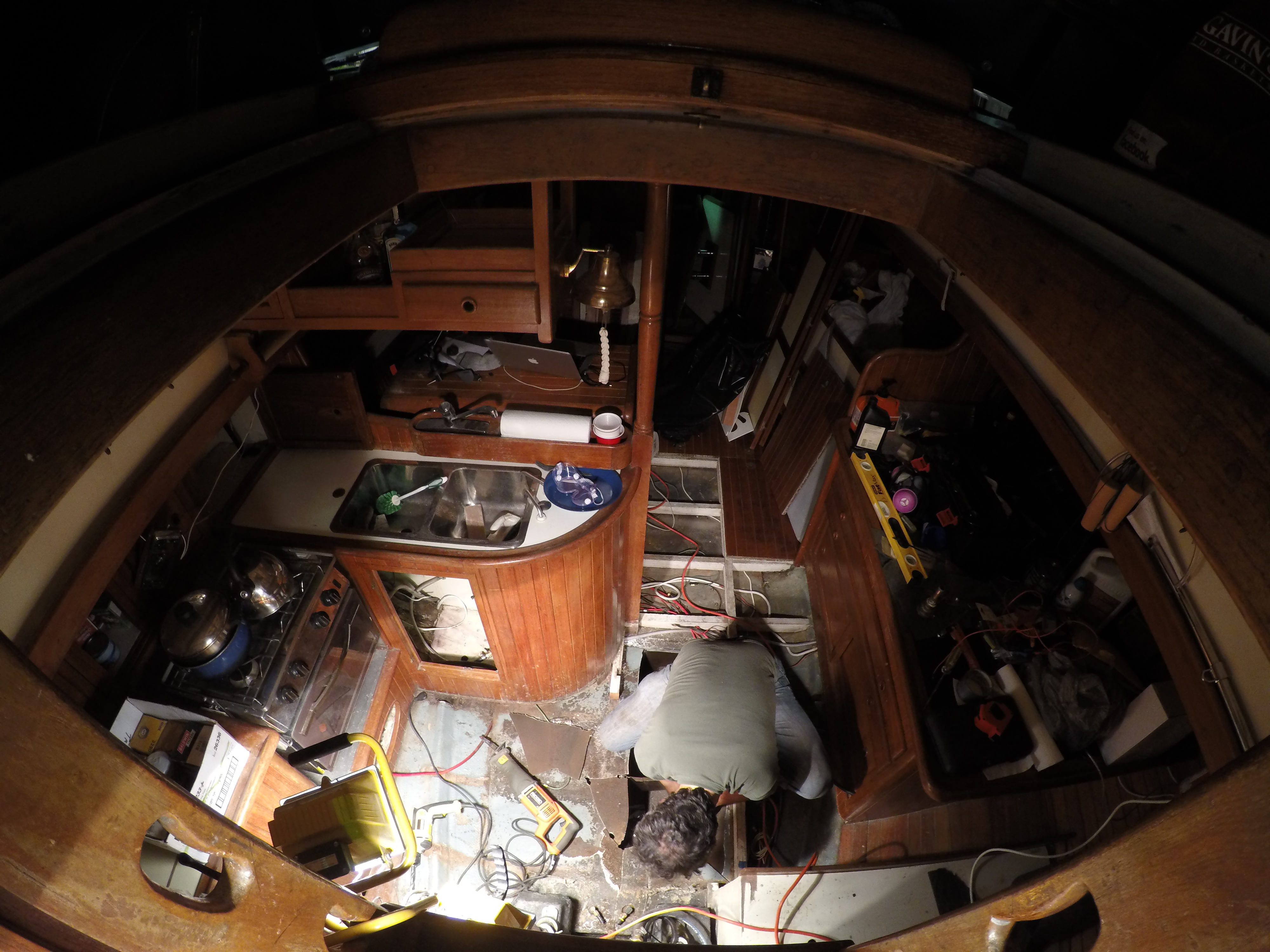 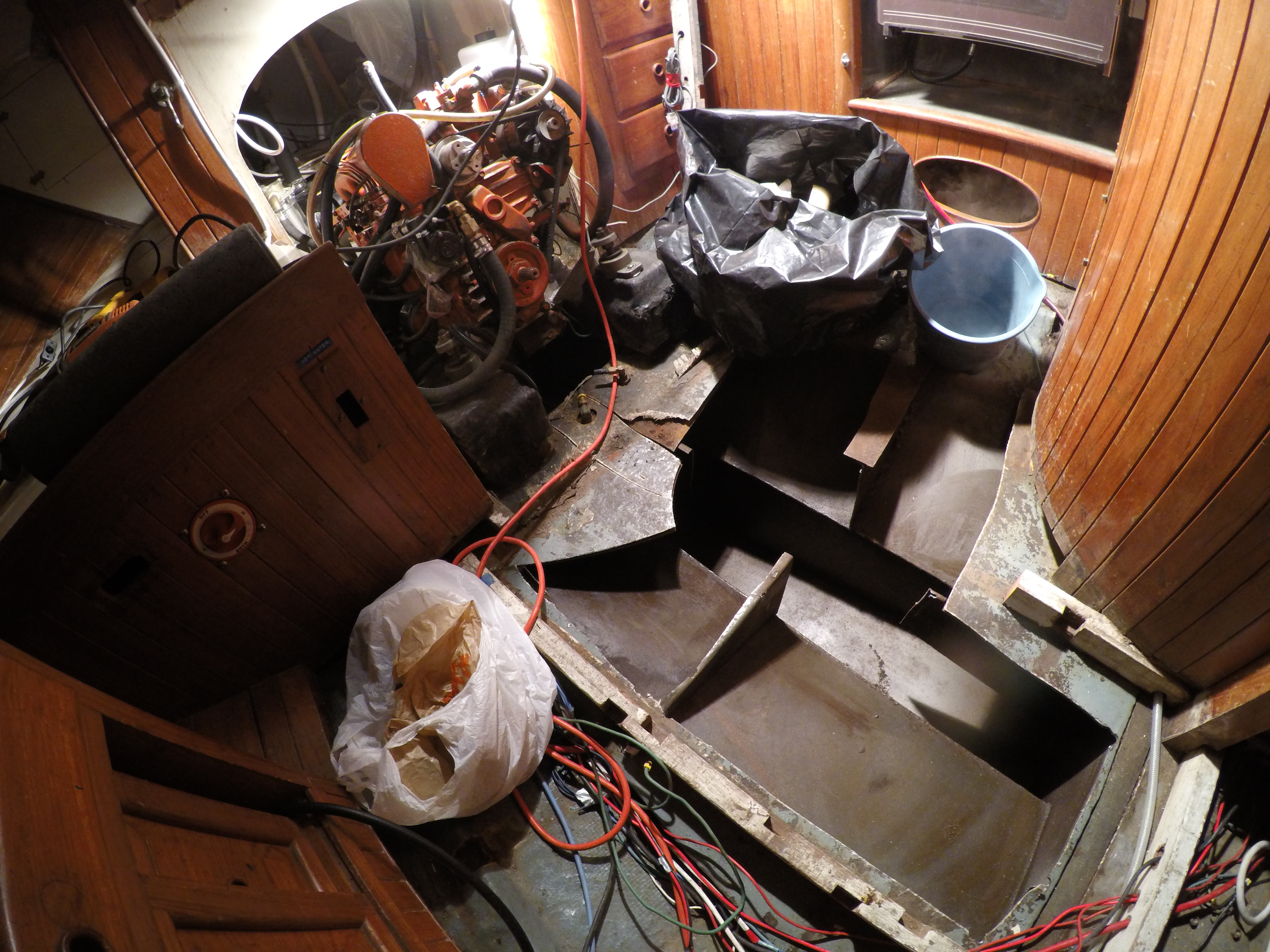 As mentioned the shop where Leela is currently located in Bellingham is simply amazing. I walked 20 paces over to Bill’s corner. Bill is the resident welder. I showed him my project. At first, we thought we would make the new tank simple and rectangular to save costs and fit it in the companionway easier. And this brings up a very important point: part of the reason the existing tank had to be demolished to be removed is that it will not fit out of the companionway. They literally built the boat around the tank so no way to get it out. All Union 36’s are advertised as having 100 gallons of diesel capacity for true offshore potential. It wasn’t until our tank was out and we made measurements that we realized Leela never had a 100-gallon tank! 65 gallons at most. Discussing with Peter the previous owner this made a whole lot of unsolved mysteries over the years much clearer. All of our tank measurements were about 70% of the measurements posted online by another Union 36 owner. How can this be? Ours was an early model hull #4. Perhaps they adjusted the bilge in later production units? I know our headroom is quite a bit more than a hull #160 that I previously toured. Perhaps 3-4″ in height were added to the bilge in later hulls and this gave extra room for the diesel tank? I guess we will never know but I’m glad for the extra headroom!

I designed the new tank in SketchUp and found that the best we could do while being able to fit the tank through the companionway would be about 40 gallons. Not much, but heck we’ll strap on jerry cans when we need to. Bill went a bit crazy on our new tank, he said it was a very unusual and interesting project for him. And he charged us a really reasonable price too.

With this new tank, we were able to add a fuel level sender so we’ll finally be able to see how much fuel is left in the tank! Bill also added a bottom drain port just in case. Added bonus: the new tank location leaves about 4″ between it and the water tank also located in the bilge. We were finally able to add a drain valve on the water tank so we can periodically flush the water and clean the tank. Imagine that!

The project is now complete. The new tank will last a very long time and gone are the smells (hallelujah!). Interestingly, we think the tank may not have had pinhole leaks after all. Upon discussing with Peter we think perhaps the inspection port gasket was not properly sealing the top of the tank. When the boat was heeling under sail some diesel would have leaked out and gotten stuck between the steel and outer fiberglass layer forever stinking the boat up. Oh well, we’re ecstatic with our new tank. It’s smaller size will force us to sail more and we love the sound of that. For those considering a similar project, the total cost of materials including tank and all new fittings was approximately $1,100 US.